There are several possible reasons for smartphone overheating. The device becomes sluggish when overheat, restart, or might be shutting down until it can cool. Either way, this has to stop. Whether you’re using an Android smartphone or an iPhone device, find out what is the cause of your phone gets overheated, how to fix the issue, and how to prevent it from happening again.

Why does Smartphone Overheating?

A smartphone’s internal temperature depends on its temperature environment. If a phone gets overheated, it can face issues, such as forced shutdown, battery drain, and even a total meltdown in some cases. There’s also a chance that it will not restart if it faced a forced to shut down because of smartphone overheating.

Various causes can overheat and that are not relevant to the outside high temperature. Several reasons evolve around a phone’s battery. If you have multiple apps running in the background, it could be a cause of battery drainage, which can drain it quickly. And, as a result, your phone gets overheated. 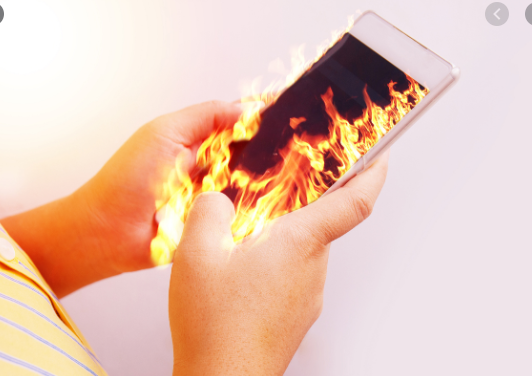 When a smartphone gets overheated, it has severe damages that are not visible. It damages several areas of a smartphone and, including;

Battery: LI-Ion batteries are the best batteries that are used by almost every latest mobile device. When a phone overheats, these batteries have two main problems. Firstly, their age, that will decrease even when a phone is not in use. They will work fine for some time, but as their performance decrease, a smartphone will start experiencing higher temperatures. Secondly, these batteries are susceptible to heat, and if your device is poolside on a warm sunny day, you will damage your device unintentionally. Temperature over 30° C can put your device at risk. Each time a smartphone faces an overheating problem, it increases the aging process of the battery.

System on Chip: If a smartphone System on Chip gets overheated multiple times, it might get damaged permanently. Your phone will start running at snail speed, as well as excessive use of weak Bluetooth and wi-fi connections, which is also a reason to heat up a smartphone.

If your smartphone runs slower than usual, or you notice that your battery is draining too fast, its time to run a diagnostic process on your device. An instant diagnostic test will analyze whether your device has succumbed to heat damage. This is the best possible solution to deal with an overheating smartphone, as well as it will ensure that a device is at the highest operational quality.

Where is this heat come from?

When phone temperature increases, the most probable offenders are either the process, screen, or battery. Each of these elements can produce heat; chemicals inside a smartphone’s battery generate electricity, the phone’s screen emits light, and the processor transfers information at high speeds. So how can you figure out what is the cause of the issue? You can make an educated guess about why an iPhone or Android device is overheating based on where the heat is coming from.

The backside of the phone

If the backside of a smartphone is overheating, the cause might be generated by the battery. The latest mobile devices use Lithium-Ion batteries, and regardless of their size, pack a mighty punch. The batteries are usually safe, malfunctioned do sometimes occur. An overheating battery can also be replaced.

The bottom side of the phone

If the bottom side of a smartphone gets overheated during charging, then the problem can be with the charge. For Android and iPhones smartphones, trustworthy chargers are the ones from phone manufacturers.

Above the battery by the screen

If a smartphone is overheating somewhere besides the battery or the bottom where it is connected to a charger, other possible causes could be relevant to the phone itself or external elements.

Here, we will discuss some other causes that could be a cause for the overheating of a smartphone.

Difference between hot and warm

Before continuing, it is essential to examine what is hot and what is warm. Your phone under regular use should not be hot, but if it is, you have a problem. However, don’t interpret warm as hot. A slightly warmer feel after playing a game for some time is normal. But if your phone displays an overheating alert, or you find the device is too overheated, then you should investigate the problem.

Below are some cases that could be a cause for overheating a smartphone;

Watching Netflix, Youtube, and others for so long hours affect a phone’s processor to overwork. Streaming videos and other content means a phone has to load the data and keep the display active for an extended period.

Malware can also be a cause for overheating a smartphone. It maxes out the device processor’s computing power. It also damages the internal components of a smartphone and affects its performance. As a result, the device starts misbehaving. It opens unnecessary apps that increase the workload of a processor, and the phone gets overheated, even when a smartphone is not in use.

Playing games for a long time

Playing high-intensity games for an extended period can cause overheating your phone as these games use the central processing core of a phone, as well as the graphics processing unit, which makes your phone heats up.

Phone settings play an essential role and impact how much energy a phone uses. Animated wallpapers, full-screen brightness, and widgets can also cause your phone to heat up.

Leaving a phone in the sun or a vehicle where direct sunlight is reachable on a sunny day can also cause you to heat up your phone. This will also impact on the screen of a phone and might not work correctly, as well as drain the phone’s battery faster.

Smartphones that feature s high-quality cameras can end up overheating your phone, but this doesn’t happen in all situations, and usually rely on some other substances, including Screen brightness, Chosen resolution, and frame rate, and Environmental temperature.

How to deal with Smartphone Overheating?

Below are some tips that can help to prevent your phone from overheating;

Increasing the brightness of a smartphone will force a phone battery to overwork, and it will end up overheating a phone. To deal with an overheating smartphone, you can use an anti-glare for your phone, which will help you to see your phone screen in the sun and prevent you from increasing your screen brightness.

As mentioned earlier, multiple applications running in the background can cause a phone to overwork, which, in result, gets overheated. To deal with an overheating smartphone, the solution is straightforward, and all you have to do is press and hold your home button and swipe away unused apps running in the background, this process will also increase the battery life of your smartphone.

You can deal with an overheating smartphone by taking its cover off that will enables the phone’s heat vents to do their job without being blocked, as well as helps your smartphone to cool down.

This is the quickest way to deal with an overheating smartphone, and this method will get the temperature back to normal.

Placing phone next to a fan

To deal with an overheating smartphone, another simplest method is to put your smartphone in front of a fan, and The breeze will bring the phone temperate back to normal.

How To Prevent phone from overheating

It is usual for smartphones to get a little heat up, especially when using it for an extended period or charging it. But the problem is frequent overheating, which cannot be normal, and in various circumstances, it is avoidable. Below are steps that can deal with an overheating smartphone;

An overheated smartphone can cause severe damage to your device, as well as its other components. To prevent a smartphone from overheating, you shouldn’t excessively use high-intensity apps, as well as keep diagnosing your device continuously to keep it at its peak. If you have taken all these preventing measures mentioned above and your phone is still overheating, or if it becomes increasingly hot, bring it to an expert for analyzes or consider reaching out to your manufacture provider for advice or a replacement.

Below are questions, that users ask more frequently;

Q: How can you cool down your smartphone?

Ans: Don’t use your phone when it is overheating or shut it down for some time; it will bring its temperature back to normal.

Q: How can you cool down your phone while playing videos?

Ans: An overheated phone can cause severe damages to your device. Put your phone in a cool place, or limit your use of playing videos.

Q: How to fix an overheated Android phone?

Ans: Turn off your phone, and don’t use it until it gets cool down. Update your phone’s applications and remove unused apps.

Q: How do phones not overheat?

Ans: Don’t use your phone while charging, and unplug it from the charger once the charge is complete.

Q: What happens if your phone overheats?

Ans: An overheated smartphone can seriously damage your battery, as well as other components of your smartphone, which will not work correctly.

Q: How can you protect your phone from overheating?

Ans: Prevent leaving your phone in direct sunlight on a sunny warm day. Heat rises instantly on the inside of a closed-up place.

Q: Can a phone explode if it overheats?

Ans: Yes, your overheated phone is more likely possible to explode or catch fire if you don’t take any preventative action.

Q: Is it normal for a smartphone to get hot?

Ans: Warm is normal, but if it increasingly gets hot more frequently, you should take preventative action to fix the problem.